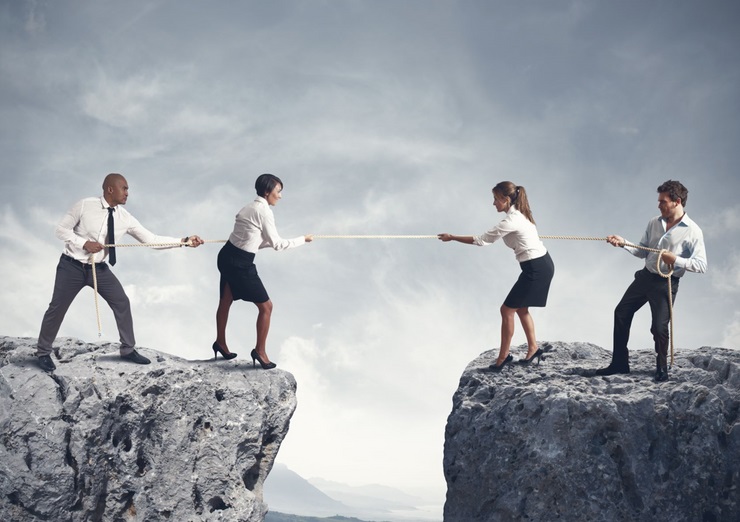 If you’re a team leader, you’ll find that conflict is an unavoidable part of your life. In the past twenty-four hours, I have observed three different team-level conflicts: one in Pret, between a shift manager and a barista; one outed on LinkedIn by a disgruntled employee; and one shared in a coaching session by a client finding the level of conflict between her peers unbearable.

Conflict can spell disaster for a team – breaking up projects, reducing job satisfaction, increasing turnover, and leading to poor physical and mental health. So if you’re the leader of a conflicting team, what do you need to know about conflict, and how should you try to resolve it?

Here are the key headlines to help you lead through team conflict:

Conflict is, on the whole, problematic for teams. It makes members feel threatened and leads individuals to struggle to process information, to give tasks their full attention, and can lead to a fracturing of a group. In the longer term, high conflict organisations, which are a type of toxic culture, can lead to mental and physical wellbeing issues for employees. Ignoring it will make it escalate.

However, low levels of some types of conflict can have a benefit for teams. They can help teams to improve their processes and ultimately their performance. If this seems to be happening in a team you’re leading, you may want to recognise it, and as long as it stays minimal, let it play out. But don’t ignore it, in case it escalates.

2. Recognise that there are different types of conflict

Research shows that there are three typical sources of conflict at work: task conflict, process conflict and relationship conflict. Task conflict is where people disagree over who should be doing what; process conflict is a disagreement over how to do something; and relationship conflict is as a result of a personal clash or dislike that is leading to issues. Different conflict types create different sorts of problems, and so as a team leader, you’ll want to try to diagnose the types of conflicts that are going on.

Relationship conflict reduces collaboration, can create outright hostility, and can undermine on the job performance. As a team leader, you need to do everything you can to reduce this type of conflict as soon as possible.

Task and process conflict can have some positive benefits as they increase understanding of tasks and processes and can lead to process or task performance improvements. But we are talking conflict at a minor level – anything that is particularly overt and is spilling over into a relationship conflict will be a problem and needs dealing with quickly.

3. Remember that personality can have an impact

Personality will shape how people experience and deal with conflict. Understanding these characteristics of the people on your team will help you as a leader to handle their conflict.

Watch out for people who don’t like new experiences, or who are neurotic. These sorts of people are likely to find themselves outside their comfort zones when involved in conflict, and likely to experience a more pronounced negative impact.

Conversely, people who are open to new experiences, and who have strong emotional stability are more likely to be able to gain the benefits from team conflict. They are less likely to have a strong negative reaction to mild levels of conflict and teams that are well-staffed with such people may find a performance improvement from such a situation.

Whilst you may not be able to cherry-pick these sorts of people for your team, you can watch out for these types and understand what could happen in a conflict situation as a result.

4. Faultlines can make the problem worse

Faultlines exist in teams where teams contain multiple subgroups which differ on demographic features. For example, a team of three BAME women and four Caucasian men could develop a faultline chopping it into two distinct groups. Where these subgroups feel a stronger sense of identity than the whole group, conflict can occur between the two or mini-subgroups.

Let’s focus now on ways to lead your team through conflict and out the other side:

A great way to start to reduce conflict is finding common attributes.

These will often be a common cause, such as winning a certain number of new clients or making sure that the team is the best-performing team in the firm this year. If you are lucky, you may even be able to find a common enemy that they are happy to work against together, because according to the ancient proverb, ‘the enemy of my enemy is my friend.’

What you’re doing here is the work of a paid mediator. Rather than letting people focus on their entrenched opinions or ways of doing things, you are encouraging them to look at their goals, to find shared goals, and then to put their disagreements aside because they realise that achieving the goal is more important than fighting over how to achieve it.

6. Be OK with diversity

People are different, and have different ways of working. Encouraging team members to have open and honest conversations about how they are different – both demographically but also in terms of personality traits, workstyles and so forth will help to break down walls, improve information sharing and ultimately improve team performance. Valuing diversity in this way, rather than trying to ignore it, is a strategy that companies increasingly try to follow and has the added benefit of reducing team conflict.

7. Develop clear shared mental models that team members can use to reduce barriers

The more your team can be encouraged to think the same way about their work and its processes, the less is left to interpretation and therefore to disagreement. If you can build a strong team culture where the members share a clear mental model of how things should be done then you are likely to create a more cohesive team that find fewer reasons for conflict. Having clear processes, having discussions about how to do things, and trying to espouse shared values regarding things like safety, project quality and so forth will help.

8. Ask for outside help if it’s getting out of control

If all of the above doesn’t help and you’re feeling out of your depth, you should ask for help. If you’re in a large firm, you will have HR professionals who are trained in conflict resolution. They may also have workplace mediators who they can call in to facilitate mediated conversations between team members. Team coaching can also be really beneficial for helping a team glue themselves together again. I’m currently working with a Senior Leadership, helping them to generate the push to work together again after lots of remote working and disagreement during the first year of the pandemic. We’re seeing fantastic results as they work hard to view the world from one another’s perspectives.

Whilst conflict is a usual part of teamwork, armed with the information above, you should be able to lead your team through conflict and out the other side, improving their performance in the process.

If you’re facing any of the issues above with your team and you’d like to talk through some of the actions you could take to reduce them, please be in touch. 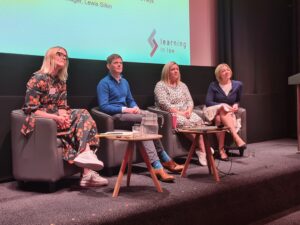 Pivots and opportunities: how the pandemic changed L&D for law firms 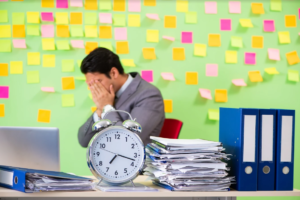 Are you helping your team prioritise? 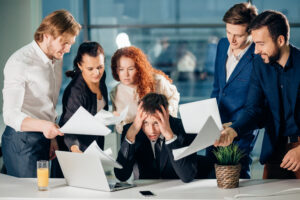 Are you forever being interrupted at work by people, emails and tech? Does it reduce the quality of your leadership? Here’s how to do something about it.

1 thought on “Leading Through Team Conflict”